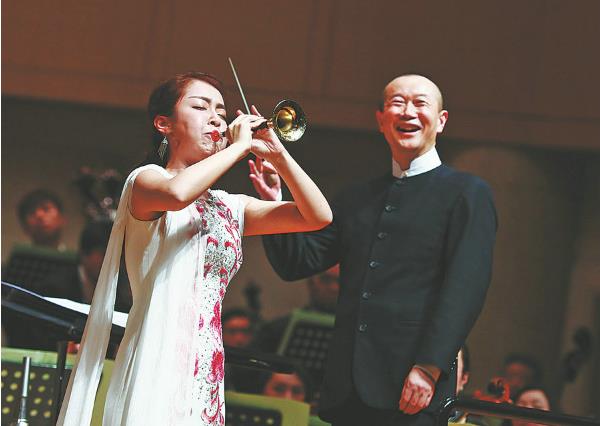 Liu Wenwen (left) performs with the China National Symphony Orchestra under the baton of conductor Tan Dun during a concert at the National Center for the Performing Arts in Beijing on Dec 30,2018.

With both her parents playing suona, and their siblings making a living by playing the traditional instrument, its distinctively loud and high-pitched sound formed the soundtrack to Liu Wenwen's youth.

Perhaps it was to be expected that, Liu, who was born in Jining, a city in Shandong province, started to learn suona at 4 years old, with her parents teaching her the intricacies of the Chinese wind instrument and its double-reed mouthpiece. In the beginning, however, she was reluctant to learn.

Suona is usually played alongside other traditional Chinese musical instruments, such as gongs, drums and sheng-a multi-reed mouth organ and one of the oldest Chinese wind instruments featuring a reed-by folk bands at weddings and funerals in rural northeastern China.

I didn't want to tell my friends that I played suona because the musical instrument was considered old-fashioned and rustic. My childhood dream was to become a dancer as, at the same time, I was receiving training in Chinese folk dance, recalls Liu.

However, her parents, whose families both have a long history of playing suona, insisted that their only daughter should carry on the tradition.

Liu's father's family has performed suona for over seven generations. Liu Baobin received training from veteran suona master Ren Tongxiang, who is known for adapting and performing the famous suona piece, Hundreds of Birds Paying Homage to Phoenix. Liu Wenwen's mother, Liu Hongmei, is a 12th generation musician in her family, which has been performing suona since the early Qing Dynasty (1644-1911).

For my parents, suona is beyond a musical instrument. It's about family and history, which runs in their blood, Liu Wenwen says. 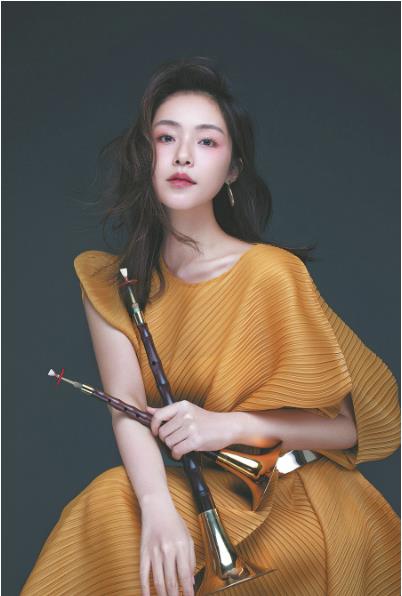 Liu, a teacher at the Shanghai Conservatory of Music, started to learn to play suona at age 4.

She recalls that she got up at 5 am and her mother took her to a garden nearby her house to learn to play suona. After about two hours' training, Liu Wenwen went to school, before returning home to practice some more.

During summer and winter vacations, her mother took her to Beijing, Shanghai and the cities of Shandong to visit veteran suona players, who would augment her training with their different playing styles. Such training also exposed Liu Wenwen to a wide range of repertoires.

Now, the 29-year-old Liu Wenwen, who is a suona teacher at the Shanghai Conservatory of Music, understands her parents' persistence and loyalty to the instrument.

I am doing the same thing now and I am proud to tell people that I play suona, she says. 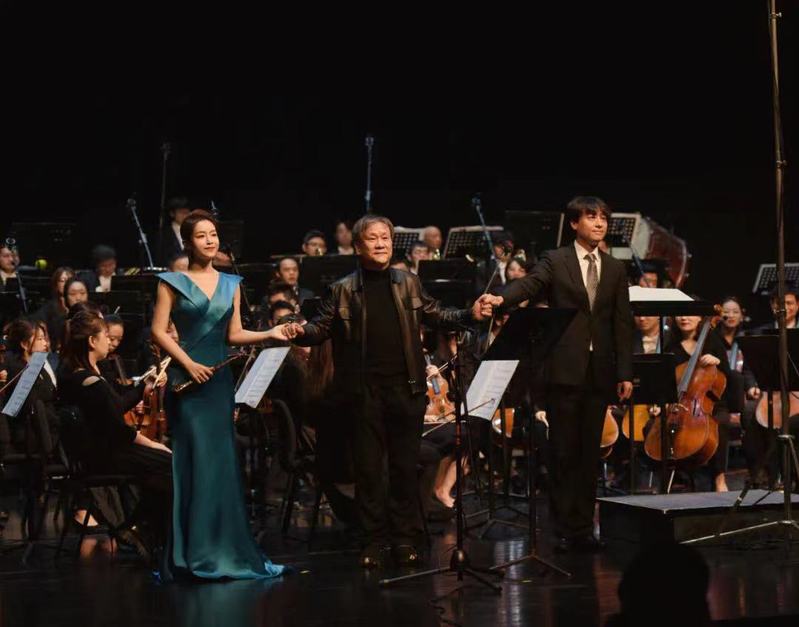 On Sunday, she held a concert in Shanghai along with the Shanghai Philharmonic Orchestra. Under the baton of conductor Zhang Liang, she played music pieces arranged for suona and symphony orchestra, including a world premiere of a music piece titled Opening the Big Gate composed by Xu Jianqiang and The Yellow River Ballad composed by Zhou Chenglong.

The instrument comes from rural China and all those music pieces feature folk music elements, such as songs from Shaanxi province, which offer the audience a glimpse into those unique rural cultures, says Liu Wenwen.

At the end of the concert, she invited her students to join her in a performance of Hundreds of Birds Paying Homage to Phoenix. The students who sat among the audience made their way to the stage while imitating the sounds of birds on the suona.

She keeps a habit of practicing at least three hours a day, as playing suona requires the function of oral muscles and breathing techniques. Before her concerts, Liu Wenwen usually isolates herself and spends eight hours a day practicing.

One of the most memorable concerts she performed was in 2017 when she performed Hundreds of Birds Paying Homage to Phoenix in Australia alongside award-winning composer Tan Dun and working with the Melbourne and Sydney symphony orchestras.

Rooster was the Chinese zodiac sign for 2017 and Tan Dun suggested that I display the techniques of my musical instrument to the Western audiences. So I imitated the sounds of a rooster onstage, which was something I learned from my mother. The feedback was very warm and the audience was wowed at the versatility of suona. I was very excited, recalls Liu Wenwen.

Like many traditional Chinese musical instruments, suona has a very long history and it was widely performed by Chinese people during important occasions in the past. It is still connected to their lives, says veteran suona player Liu Ying, a professor at the Shanghai Conservatory of Music.

At 15, Liu Wenwen moved to Shanghai and started to study with Liu Ying, who was impressed by the teenager's solid skill and her family's long history of preserving the musical instrument.

Suona might not seem like a very sophisticated musical instrument that looks simple, but it requires a lot of skills to play. Many classic suona pieces, which are deeply rooted in traditional Chinese folk culture, take a player at least 10 years to produce the best sound, Liu Ying told Liu Wenwen.

She traveled to rural China to visit suona players, learning skills and repertoires from them.

It's very difficult to learn their skills just by observing their performances. The sounds are made from their mouths. I can only hear the sounds and try, over and over again, to reproduce them, Liu Wenwen says.

With urbanization and the development of rural China, folk bands are facing a decline. The sound of suona is also endangered.

In the past, my parents' siblings played suona, but now I am the only one of the younger generation who still plays, which is sad, Liu Wenwen says.

However, the young musician is ambitious and is keen to work with musicians of different music genres, such as jazz and bossa nova, in a bid to give suona a contemporary twist and attract a younger audience.

She has noticed that there are some young suona players actively promoting the musical instrument on social media platforms, which is helping the instrument experience a revival. For example, a young man named Chuanzi adapted Norwegian music producer Alan Walker's hit, The Specter, with suona. Another player, Asheng, adapted American singer-songwriter Billie Eilish's Bad Guy for saxophone and suona.

There are many children in Shanghai learning suona, which is a good sign. Their parents, born in the 1980s and '90s, are open-minded about the instrument, says Liu Wenwen.