To celebrate the 2021 Spring Festival and call upon all friends work together to overcome difficulties and create a better tomorrow, the Chinese Embassy in the United States cordially invited American and Chinese Musicians to present a virtual concert. 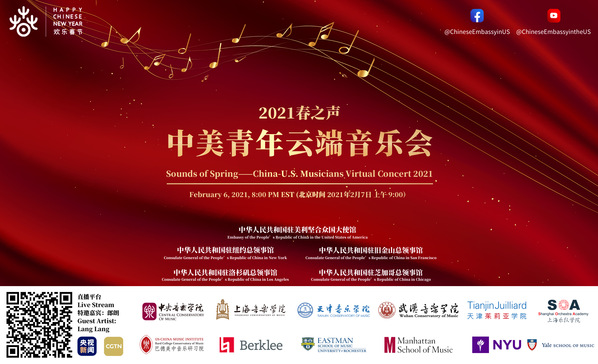 On February 7 (9:00 AM, BJT), the virtual concert was succesfully held through live-streaming via different channels to the world. Young Chinese and American musical talents led by well-known artists from world-renowned music schools including SHCM and its partner music schools in the U.S.,presented an online music feast.

As music is a wordless language which connects people together all around the world, this event not only intended to welcome the Year of the Ox with virtual fun, but also showed our good wishes of the unity and peace for this world.